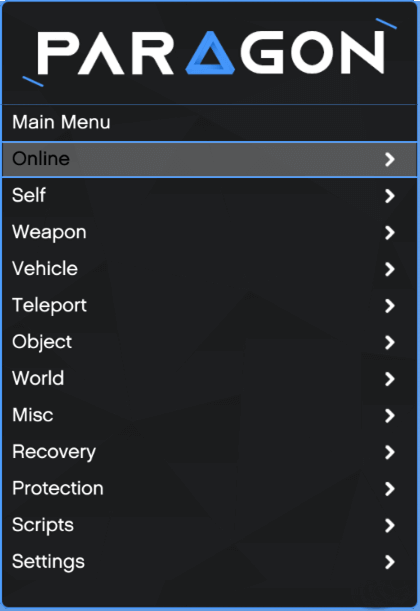 No game bans, ever.

Our menu is updated daily.

Check out our showcase video and see why the Paragon menu is loved by gamers all over the world.

Our trainer cheats are really something else. With extensive coding from our team, we're proud to offer our next generation mod menu for all gamers.

Our mod menus are completely safe to use. No bans or PC issues.

Paragon Menu has been coded from scratch by our team.

The Paragon trainer is compatible with a ton of different PC games.

See why Paragon mod menu trainer is the best rated ones in the industry.

Adam Siro
User
«The best mod menu I have ever tested, and I've tested A LOT! Great work guys»

MaxxDeamon
User
«The best cheat menu with lots of features. Still not banned either. Awesome»

A mod menu is a modified game client embedded into a specific game and allows the player to customize and make some changes to the game that aren't necessarily allowed by the publisher. These mod menus are also popularly called trainers and are generally different from your standard game mod. One of their major differences is that a mod menu will give you more control and customization ability that a standard mod will not. You can switch it on and off depending on your gameplay.

Mod menus are commonly used in almost all gaming systems such as PC, Android, iOS, and even the PlayStation. Mod menus usually involve complex coding and can take a long time before one gets a mod that will work well and still avoid detection.

There are numerous game mod menus, all for different specific games. Since the demand for reliable trainers has been increasing, more are being released to cover as many games as available in the market. At Paragon Trainer, we pride ourselves on offering mod menus for some of the most popular games in the market. These games are the famous Grand Theft Auto 5 and Red Dead Redemption 2 (RDR 2). These games have maintained a top position as some of the best open-world games of all time. We have created mod menus to take your gaming experience in all these already popular gaming titles to a whole new level.

A mod menu will add a lot of new features to your gaming experience. You will no longer have to spend a lot of time through the different quests and missions on the game. A mod menu will help you beat these missions as easily as possible and help you advance faster and more conveniently through the game. At Paragon Trainer, we know the importance of having mod menus for a gamer, and we have made ours incorporate all the features of an ideal gaming experience. Although the trainers give you impressive abilities, we make sure to maintain the authenticity of the game.

Creating the perfect mod menu takes time, skill, and dedication, things we at Paragon Trainer have enough of. To achieve this, you first have to understand how a mod menu works. Producing a standard mod menu requires that a programmer reverse-engineers the game code and finds some loopholes that will allow them to add alterations to the game without changing its basic components and features. This applies to Android and iOS game apps. It can, however, also be sued for complex games such as GTA 5 and RDR2 on PC.

You can also use code injection software to edit the game's memory and make additional patches that will allow it to run restricted codes. At Paragon Trainer, we use the former method as it is more efficient and will result in a better and more responsive trainer. Since the process is very complex and there are thousands of lines of code involved, it can take weeks or even months to develop a satisfactory trainer. We make sure to look into all the trainers' features and make as many improvements as possible where necessary.
Get in touch:
[email protected]
GET PARAGON